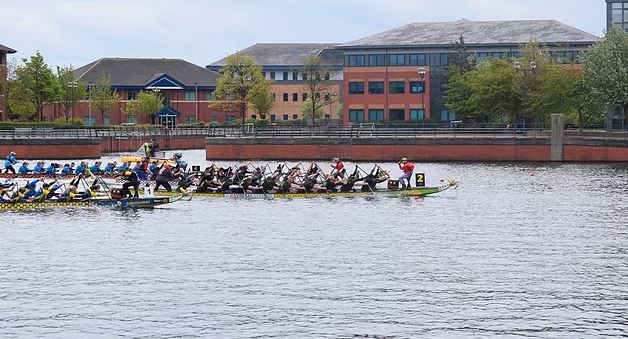 The racing took place in Stockton on Sunday 5 May and Notts Anaconda competed as an ‘open’ crew – which allows any combination of men and women with a maximum of 20 paddlers in the boat – and also in the ‘ladies’ category, which requires all the paddlers plus the drummer and the helm (who steers the boat) to be female and allows a maximum of 14 paddlers in the boat.

Ali Marsland has raced with Notts Anaconda for 17 years and says yesterday was the best result she’s seen: “A clean sweep of three first place positions is just amazing – the best result it is possible to get. In dragon boat racing there are so many things that can affect a result – fitness and technique are important of course, but external factors such as the wind can have an impact, and when the racing is tight, we are often reminded that the most important muscle is the one between our ears!“We’ve all worked really hard in training and yesterday it all came together. We stayed focused, supported each other and really worked together ‘as one’ both in the boat and on land. This is an absolutely fantastic result for us, and it was a day we’ll all remember for a long time to come.”

Crews travelled from all over the country to take part in the British Dragon Boat Association’s race event, all looking for points that would go towards their final placing in the league.In the 200m Open, Notts Anaconda raced a heat, semi-final and final – and saw off strong competition from 16 other crews to take first place in every race and the fastest time of the day.

The ladies competition was raced over 200m and consisted of a heat and a final – with Notts Anaconda again taking first place in both races.And in the 500m Open competition, the club again raced a heat, semi-final and final and won each of their races. The club set the fastest time of the day in the heat – and then smashed their own record to set a new fastest time in the major final.

Notts Anaconda are based at Trent Bridge and usually train twice a week. At the moment the crew is also running extra training sessions as they gear up to compete in the European Club Crew Championships in Seville, Spain, at the end of July. They will also be competing over the next few months in national league events in Milton Keynes, London, Liverpool and Nottingham.
Notts Anaconda always welcomes new members, with or without any amount of sporting experience. For more information email secretary@nottsanaconda.co.uk.

On to sunny Bristol for race 2 of the BDA league, this picturesque venue once again buzzed with activity and the echoing sound of dragon boat drums.

The journey time had an effect and Notts Anaconda fielded quite a small crew having to borrow 3 ladies from Cambridge Royals to make up numbers in the ladies boat, thanks ladies!

Our first race of the day was the open heat which had us facing off against a combined crew from Soaring Dragons and Typhoon, and St Neots in our own pool boat. We proved quickest off the start and although the other teams pulled back some distance towards the end we finished with a decent 2 second lead, taking us straight through to the semi finals.

Next up was the ladies heat, this proved to be a hard fight with wash from the juniors boat giving everyone some rough water.
The ladies finished second in their heat behind Exe-Calibre ladies but unfortunately didn’t qualify for the semi finals. Next time ladies!

Once again we faced a familiar lineup in the semi finals (hi guys, its us again) we gritted our teeth and got ready to chase that finish line down.
Wraysbury got off to a flying start and pulled a boat length ahead almost immediately but Notts fought hard to chase them down, trading second place with Amathus along the full length of the course! We waited for the results with baited breath for what seemed like an eternity before discovering we had taken second place by less than two tenths of a second!

The final race of the day saw some very weary and wet crews setting off on the 3.5km pursuit race. Notts fought hard to put in a great time but some controversy saw us impeded in the first turn, losing precious seconds after having to slow down.
We took 8th Place with a time of 14:20.63.

Overall it was a great day, the races were (mostly) on time and the weather provided us with some handy sunshine to dry off those wet clothes.

And so to our home race.

The sun was shining and the weather smiled on us today, setting the scene for an exciting day of racing. The Anacondas arrived feeling fresher than usual for a race day, ready to take on the visitors on our home turf.
We also did our best to make our visitors feel as welcome as possible and our club bakers had excelled themselves with the variety and amount of cakes, cookies and snacks on offer on our cake stall. Tuck in everyone, make your boats as heavy as you can mwhahahahah… ahem.

Evil plans aside, it was a day of close and exciting racing for everyone. The Anacondas were out in force and this event saw the return of the Anaconda Toos ready to take on all challengers and eager to show the Anacondas how it’s done.
The ladies fought hard in the S12 to take third place overall, chasing Firestorm in first place and Amathus Ladies in second.

The Open S12 crew finished third in a very tight race but were bumped up into second place after Soaring Dragons were given a one-second time penalty for finishing out of their lane.

In the S20s the Anaconda Toos took 10th place as they absolutely stormed ahead of the competition in the bowl minor final, finishing over four seconds ahead of the second placed crew.

The Anacondas put on a truly spectacular performance, racing against Wraysbury, Typhoon, and Amathus. Chasing Wraysbury to the finish line we ran out of race before we were able to catch up, taking fourth place.

The 2000m races proved to be real crowd pleasers, with both Anaconda crews showing our ‘sexy turns’ according to one YouTube commentator! There was also some excitement with Amathus losing their steering arm after the last turn of the cup race, costing them some time but not the race thanks to the skills of their helm, who quickly grabbed a paddle from one of the crew and steered the boat across the line to take first place.

The Anaconda Toos finished fifth in the plate final and the Anacondas took fourth place in the cup final.

The Vogalonga is a regatta that takes place in Venice every year. It started in 1974 as a protest against large powered boats damaging the waterways and has since grown into a huge event with boats of all shapes and sizes taking part.

This year the Anacondas decided to take part in the 30km scenic paddle around the islands and lagoons, and so began a fairly epic undertaking.

Three crew members volunteered to drive the boats down to Venice from Nottingham by taking turns to drive, sleep and eat jelly snakes to keep their energy levels up, totalling a 2,205-mile round trip.

16 paddlers and a drummer caught flights and an impromptu plane vs car race was on! The plane won thanks to some traffic in Italy… but only just.
After a day of exploring the meandering streets of Venice, we got our race heads on and started carb loading with lots of pizza and pasta (beer is carbs too, right?) and were soon ready for the race day.
The race itself was an incredible spectacle. 2,000 boats and over 8,000 competitors gathered in the water around St Marks Square to wait for the cannon shot marking the start of the race.

We didn’t have to wait long and set off at a relaxed pace intending to take the next few hours to enjoy ourselves and see the sights. Unfortunately there was another dragon boat ahead of us… and well, we couldn’t have that so the race was on!
Pretty soon we lost count of the dragon boats we passed, always with a cheer and a friendly wave, and reached the half way point in just over an hour. A quick refuel with energy gels and jelly snakes and we set off again.
Before we knew it we had turned into the Grand Canal. All I can say is ‘WOW’; a wall of noise and cheers followed us all along this historic waterway. The crowds really get behind everyone and their cheers helped us find that last reserve of energy.
We crossed the finish line in an absolutely astonishing (to us at least) 2 hours and 35 minutes.

The weather held off once again and provided us with warm sunshine for the best part of the day; only a welcome cooling shower before the 5km race reminded us we were in the UK.

Unfortunately a short-handed ladies crew struggled to keep up the pace and despite some helpful subs did not qualify for the final. Better luck next time ladies.

The 200m open saw Notts come back strong and finish first in the plate minor final to take ninth overall.

The 5000m pursuit race has to be the highlight of the season so far. Notts charged forwards to overtake three crews ahead of us, at one point battling for over a mile with Bristol and Exe-Calibre. With none of the three crews wanting to give up the lead on this narrow stretch of river the race saw some clashing of paddles and our helm playing chicken with river barges and canal boats. The crew put their heart and soul into the last stretch of the race to finally pass Bristol (great racing guys!), taking first place in the Plate to finish eighth overall.

A fabulous sunny day saw a group of bleary-eyed Anacondas arriving at Bristol Docks. With everyone settled into the new fast-paced routine that the ladies have long been used to with Super 12s we prepared ourselves for a great day of racing.

The open Super 12s crew took second place after being just pipped to the post by the home team. It was a closely-fought race to the finish with just 0.39 seconds between us.

The 200m open racing saw another close-run final for Notts Anaconda with us taking third in the plate minor final to finish 10th place overall – just 0.3 seconds ahead of Worcester Dragons. Can anyone say photo finish?The 3,500m at the end of the day saw us finish fourth in the plate to take 11th place overall.

It was a great start to the 2017 season at Stockton on Tees hosted by Powerhouse Dragon Boat Club. The weather played reasonably nicely but high winds caused the 2000m race to be cancelled.

This was the first run of the open 200m Super 12 which, when combined with the ladies Super 12, seemed to work well, making for some fast and furious racing with speedy turnarounds for all involved.

The Anacondas got off to a great start to the season and the results below show that nicely.

Why not get in touch with us and try out dragon boat racing!

It’s a great way to get fit and meet new people.